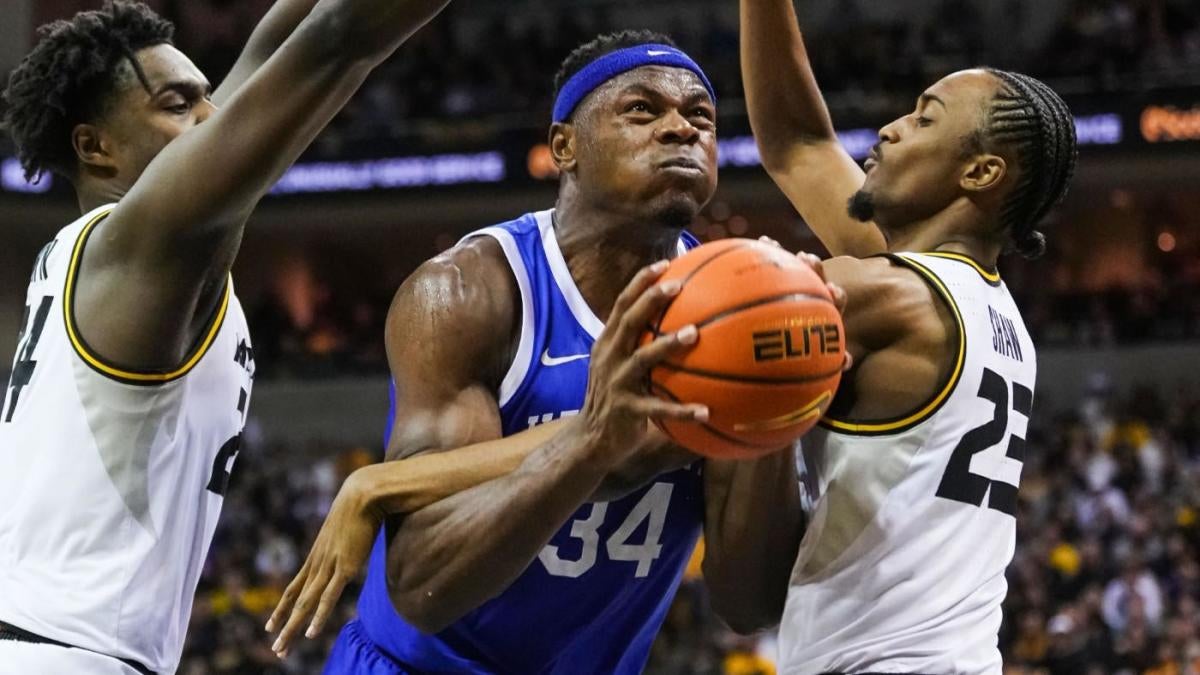 After finishing the season ranked 4th in the AP Top 25, Kentucky failed to garner a single vote in this week’s poll, a 1-3 start to SEC play marked by an embarrassing 78-52 loss at Alabama on Saturday. That was followed by a 71–68 loss to South Carolina on Tuesday that snapped a 28-game winning streak for the Wildcats at Rupp Arena. 46 in net with an 0-4 record in Quad 1 games, the Wildcats are a deep disappointment after returning from a 26-8 comeback with national player Oscar Tshebwe along with other key players such as Sahewir Wheeler and Jacob Toppin. Team.

After a shocking loss at the hands of No. 15 seed St. Peters in the first round of last year’s NCAA tournament, frustration with 14th-year coach John Calipari runs high among UK fans. The program’s last win in the Big Dance came in 2019, and it suddenly appears as though there’s no guarantee that 2023 will bring one.

But with two months left until Selection Sunday, Kentucky still has time to turn things around. Five-star freshman Kasen Wallace and Chris Livingston have each shown encouraging flashes of brilliance and should only improve as the season progresses. Sharpshooting guard CJ Frederick should also return from a finger injury at some point during league play.

The range of consequences for the Wildcats remains vast, and the saga of Calipari’s tenure to command the sport’s collective attention for weeks to come appears to have reached a turning point. For this week’s edition of Dribble Handoff, our writers are offering their projections for how the rest of Kentucky’s season will play out.

Cats Are a Bubble Team, But Big Dances

Kentucky has been ineffective throughout the season and doesn’t seem to be on the verge of turning things around. The Wildcats blasted Alabama by 26 points. They are 3-3 in their last six games, still in possession of zero Quadrant 1 wins and are ranked 45th in the NET, 56th on BartTorvik.com and 62nd on KPIs.

At this point, I doubt the Wildcats will ever live up to the preseason expectations that had them ranked No. 1 on KenPom.com, top five basically everywhere and labeled as SEC favorites — but I still think they’ll land on the right side of the bubble and make the NCAA Tournament. And then… who knows? The year before, UK had a great regular season followed by a terrible NCAA tournament. This year could possibly be the opposite – a disappointing regular season followed by a decent NCAA tournament. The Wildcats still have the CBS Sports National Player of the Year (Oscar Tshibwe) and a projected lottery pick (Kayson Wallace). It’s not the most talented roster John Calipari has ever seen, but it’s still a more talented roster than most coaches. Now it’s just a matter of figuring out a few things, trying hard enough to make a field of 68, and then seeing if things can hit the right way when that single-elimination tournament gets underway. — Gary Parish

Although UK sits at 1-2 in the SEC – I expect it to be 2-2 after beating South Carolina at home on Tuesday night – this conference is going to be very tough to expect the Wildcats to pull off anything. Can go Four-game winning streak between now and the postseason. The final edition of the SEC/Big 12 Challenge features seven road tests and a home game on January 28 against No. 2 Kansas. So, the losses will pile up over time. However, I expect Kentucky to find some solutions and tighten up their defense.

I expect it to pick up some important Quad 1 wins and ensure that it dodges bubble talk by the second week of March. This is going to end like a team that was 8/9 in 2014. Because there are five losses already and probably at least five more coming between now and Selection Sunday, it’s optimistic to say that Kentucky will earn a one-digit seed. I’d say it does, narrowly, though, thanks to a good showing in the SEC tournament. And: Kentucky is going to beat Kansas later this month. Matt Norlander

There is no doubt that Kentucky has underperformed relative to pre-season expectations and even prompted a hard reset relative to relaxed post-season expectations after early struggles. A 10-5 start to the season is no small feat at Kentucky, even if you have serious back problems. There are reasons for cautious optimism, however. This is quietly one of the best 3-point shooting teams Calipari has fielded in the UK, and Oscar Tshibwe continues to rattle the offensive glass and produce second-chance opportunities for all his struggles.

A few minor tweaks to player roles and a focus on doing this well — launching 3-pointers, feeding off opportunities to Kaisson Wallace to set the table and getting Tshibwe into favorable spots — should be enough to turn things around. Could There are still some things on the margins that need significant improvement — this team is terrible at free throw shooting and it consistently commits late Hero Ball offense — but I’ve seen enough positives to think that this number 6 or maybe 7 seed in the NCAA tournament and work their way up to become a top-15 level team by the end of the regular season. — Kyle Boone

UK First Four, one of the last Big Dance teams

Kentucky plays a classic offensive style that is defined by a methodical pace and limited floor distance. Without an elite defense that can consistently create transition opportunities, United have been stuck in half-court sets and have struggled to find a rhythm or build momentum. Schematically speaking, Calipari just doesn’t have it at this point in his career to pull the strings needed to unlock the potential of this roster.

The SEC’s bottom feeders will ensure that the Wildcats win a fair number of league wins. But UK does not get a regular-season rematch with No. 4 Alabama, which heavily emphasizes two games against No. 5 Tennessee and two games against No. 15 Arkansas. Outside of those contests, a game with No. 21 Auburn and a Big 12/SEC Challenge game with No. 2 Kansas represented Kentucky’s only chance to add substance to its resume.

It’s hard to see the Wildcats doing better than maybe 2-4 or 3-3 against Arkansas (two games), Tennessee (two games), Auburn and Kansas. Kentucky looks destined for the NCAA tournament bubble, and I’d take the Wildcats a spot in the first four, as other blue bloods like Indiana, Michigan State and UCLA have done in recent years. David Cobb