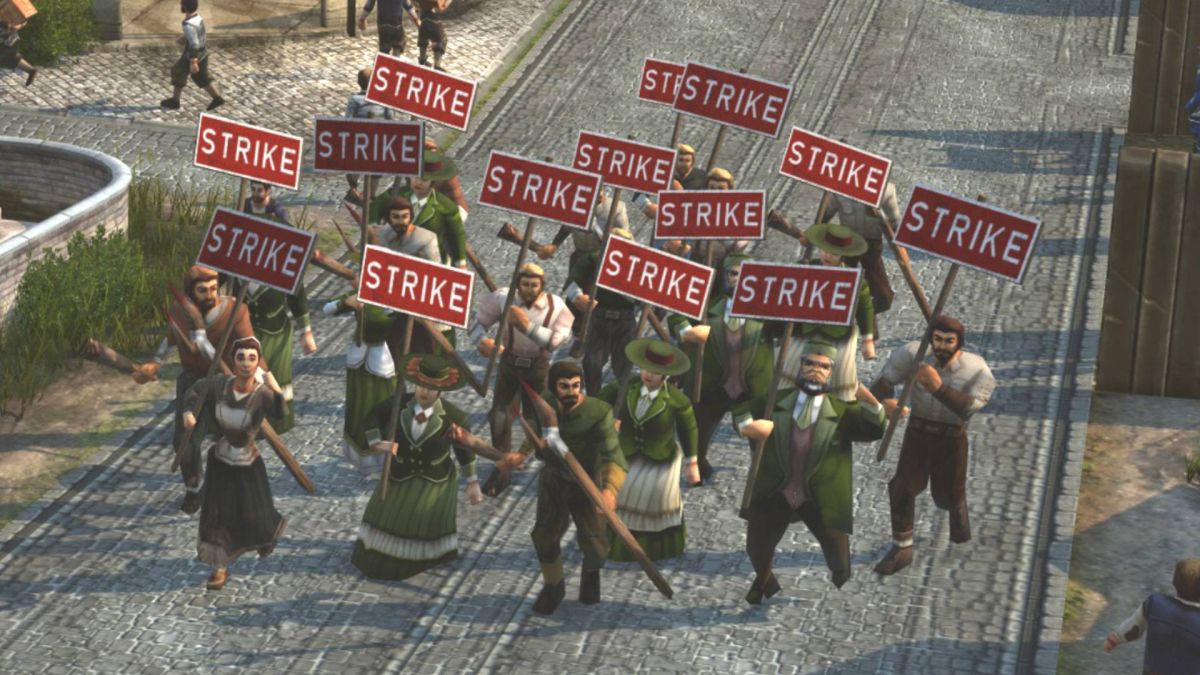 Of all my worries for 2023, being torn apart by a violent mob angry that they didn’t have access to soap was not at the top of my list. Then Ubisoft went ahead and announced it was bringing strategy game Anno 1800 to consoles, letting you take control of a growing empire, building supply chains and feeding your growing population with luxury goods. . Of course, fail to meet their demands, and your citizens will get awful revolution-y.

Released on PC in 2019, Anno 1800 is a wonderful strategy game that focuses on the construction side of imperialism rather than the more violent, colonial aspects. You start the game as the leader of a small island, rich in resources but lacking in infrastructure. You build houses, farms and markets while attracting new citizens to set up shop and work as you grow your town.

All of your people have needs, which only get more complex as you move up the technology tree. First, you’ll be able to provide for them everything you can find on your island – turning your wheat into bread, your clay into bricks. Soon, though, you’ll need to produce goods that require resources you can’t get locally. You must build trade networks with other islands, bringing animal fat to make soap or cotton for bowler hats.

Nail down the trade network and manufacturing, and your people will power through the Industrial Revolution. Mess it up, however, and your people will gather on street corners to grumble about their lack of soap and bowler hats. Leave them displeased, and they will form into groups carrying banners and building barricades. Eventually, they’ll march on your mansion and tear you limb from limb in return for leaving them disgusting and stinking.

Anno 1800 is coming to PS5 and Xbox Series X on March 16th. The original development team handled the port and as well as incorporating all the free updates and quality of life improvements from the past four years, this version features an all-new interface and controls to make it possible to play the game on a TV with a gamepad. plan.

Strategy games traditionally require you to sit at a desk a few inches away from your monitor screen, equipped with good mouse controls, especially when you have a variety of resources to manage and navigate. There are menus. Translating this experience to a console has often challenged developers; Because just letting the thumbstick control the mouse cursor doesn’t solve the problem. Sitting six feet away from the TV can be a frustrating experience, trying to click a tiny menu button and avoid pressing the icons on either side of it.

In recent years, strategy game developers have finally cracked how to make complex, PC-centric titles work on consoles. The cursor has been ditched in favor of more forgiving navigation methods, menus have been redesigned with larger fonts and icons, and you can’t move the mouse to a smaller button, but instead triggers, the D-pad, and face buttons. You can navigate using To quickly move from screen to screen.

It’s great to see the Eno series finally make the jump to consoles, especially after more than 20 years of only being available on PC. It’s about time PlayStation and Xbox players find out what it’s like to not make an efficient bowler hat production line.