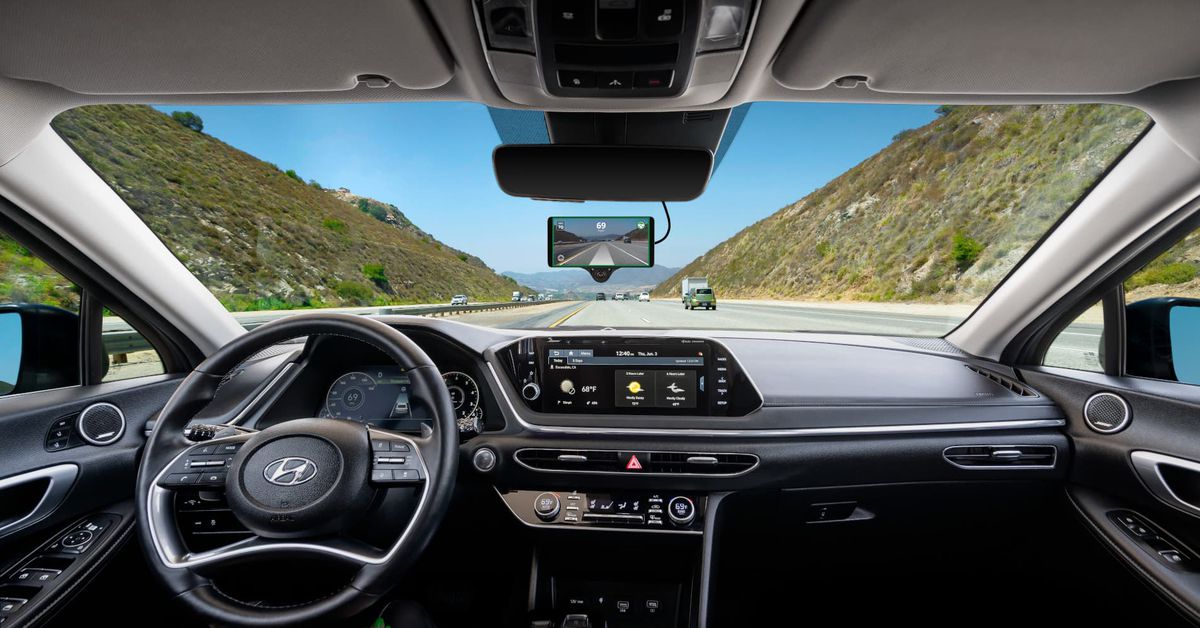 George Hotz just wants to build robots. You can see that desire in the Comma 3, the next-generation assisted driving hardware from his company Comma.ai.

“It has two eyes,” he told me, pointing to the two cameras facing forward. He then holds the device up to his face so that I can see that the cameras are placed at the same distance as a set of eyes on a human.

Hotz continues, “It has a mouth to speak. It can breathe air to cool itself… We are building a human head.”

You may remember Hotz when he went by the hacker name “GeoHot” when he was 17 for jailbreaking an iPhone. Since then, he has become a thorn in Elon Musk’s side, dissing Tesla’s Autopilot technology. And he angered Sony by breaking into the PlayStation 3. (Sony sued but later dropped the suit on the condition that Hotz agree never to tamper with its hardware again.)

The National Highway Traffic Safety Administration is keeping a close eye on that, even as Hotz almost stopped making Comma units in 2016. He fired himself as CEO of Comma and now claims he is just a marketing intern. (He recently took a spin at Musk’s Twitter as an intern but left after a couple of weeks.)

Hotz has been vocal about his dislike of native driver-assistance systems, and that he has always wanted to make “driving chill”. I’m about to get a demo of this latest iteration just to see how cool it can be.

The Comma 3 is bigger than a cellphone but smaller than an iPad. Unlike previous iterations, the Openpilot assisted-driving software is already downloaded to the device. After all, of what use is a head without a brain? Drivers only need to mount the system on the windshield, run a wire down to the vehicle’s CAN bus, and plug it in. There, it accesses the car’s adaptive cruise control and lane-focusing technology, turning them up to 11.

Comma 3 hands-free driving-assist technology is better than anything you’ll find from a traditional manufacturer. The system is installed in a Kia EV6, at a demonstration drive in Las Vegas. There’s a rear-facing camera on the Coma 3 that’s directed toward me to make sure I don’t take my eyes off the road or fall asleep. If I do, it issues a visual warning, then an audible warning if I still refuse to pay attention – or wake up.

The six-inch display screen shows the road ahead, an overlay of lane markings so I know what it’s looking at, the car’s speed and the system’s maximum speed. The device also serves as a dash cam, recording up to 1TB of video if that’s your jam. It’s GPS enabled, although it won’t follow those directions yet.

To start, I press the adaptive cruise control button on the Kia’s steering wheel. First off, it’s not much different from GM’s Super Cruise or Ford’s BlueCruise. I can take my hands off the wheel and the system follows traffic with ease, takes gentle turns smoothly, changes lanes automatically, and overall, doesn’t make too much fuss. However, drivers can only use Ford and GM’s systems on prepared roads. Coma 3 is good enough anywhere.

That’s because it takes all its direction from two high-tech cameras. It sees lane markings, the speed of other cars around it, some traffic cones, and even a wayward cyclist and bus… drives by. Of course, I keep my eyes up, and I’m ready to take over at any moment, but the coma-controlled Kia is doing just fine on her own.

The biggest upgrade from the Comma 2 is the ability to recognize traffic lights. A few times during my drive, I’m first in line at a red light. The Coma sees 3 red lights and stops the car smoothly, the front tires are in line with the curb on the corner, something I failed to do in my driving test at age 16 and got a 97 instead of a perfect score Gone with the percentages. This holds the car at a complete stop until the light turns green, then it gradually accelerates.

The Coma 3 is the only system that can stop at a red light. Tesla comes closer, recognizes the traffic light but does not recognize the color of the light. Tesla’s full self-driving system, a beta driver-assistance program that won’t enable fully autonomous capabilities, no matter what Musk says, until it’s given input from the driver that it’s okay to proceed Is.

Another “oh wow” moment is when the car in front of me turns directly into a gas station. Other native adaptive cruise control systems slow down for the turning car, then wait until the lead car is completely out of the lane before starting to accelerate again. That’s not how humans drive and always leaves me screaming “Go on, you stupid computer!” coma 3 turns right, when the car turns the speed increases mostly out of lane. It’s a more natural feel.

Even driving through some tight chicanes feels pretty normal. Rather than keeping the car centered in the straight lane, the Coma 3 lays a much more natural course, cutting corners ever so slightly, though still staying within the lane markings.

That’s not to say that comma 3 is perfect. It got displaced once on my test drive at quite a confusing intersection. The light is located in the middle of a curve in the road and the sun is reflecting off the lines painted on the pavement. The human driver, me, is a bit confused, so it’s hard to blame the robot.

That’s not to say that comma 3 is perfect

Still, as cool as the Comma 3 is, it doesn’t drive your car by itself. Even with my hands off the wheel, I still have to pay attention and be ready to take over at any moment. Case in point – I’m stopped at a red left-turn arrow, but when it turns green, the car doesn’t move.

“It’s intimidating,” Hotz says, reminding me that he really thinks of the system as a human-robot. However, all I have to do is give the steering wheel a little input, and the car Starts turning. Driving assistance, yes. Self-driving, no.

The Comma 3 is compatible with over 200 vehicles, some as old as model year 2014. Comma.ai says its system works exclusively with late model Hyundai and Toyota cars. You can pick one up on Comma.ai’s website for $1,499, plus $200 more if you want more memory storage for video and your car’s specific wiring harness.

The units have been on the market for about a year and a half, and 5,000 of them are in the hands of drivers as we speak. Hotz thinks that, within two years, we’ll see a Chinese manufacturer making a car with its technology. However, it’s unclear what the future holds for Hotz and his company.

Hotz claims to have a rudimentary comma body, and I’ve already seen a comma head during this demo. Whether a full-fledged driving – or vacuuming or cooking – robot is something that Comma.ai can produce remains to be seen. One thing I can say for sure: Hacker to robot-builder is quite the career trajectory.