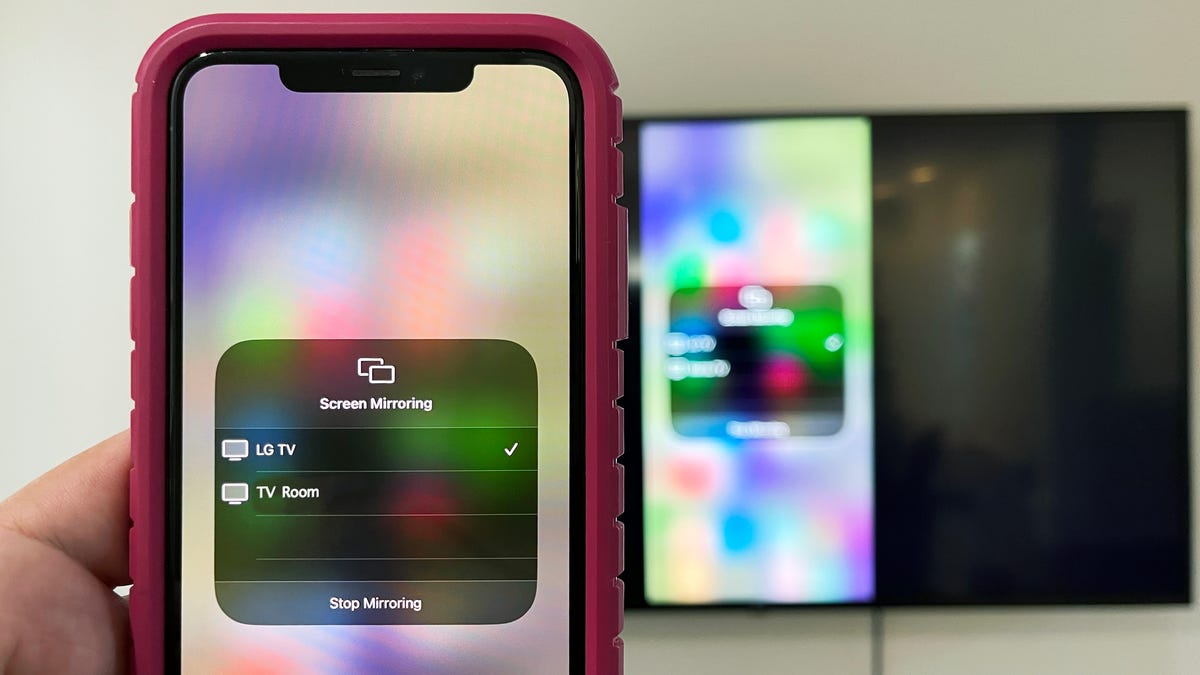 AirPlay from Apple allows iPhone users to mirror their screen on a TV, so that they can play their videos and music or view photos. We’ll focus specifically on a few different ways to do this.

as well: How to Connect Your Laptop to a TV — Quickly and Easily

If you want to AirPlay to your TV, make sure that your iPhone and your television, Roku or Apple TV 4K, are connected to the same Wi-Fi network. If you have a Roku you’re using to connect, make sure it has the latest updates Settings > System > System Update > Check Now,

How to stream from your iPhone to your TV with AirPlay

We’ll cover two easy ways to stream from your iPhone to your television: You can choose to use screen mirroring or stream specific media like photos and videos without mirroring your screen.

I’m going to select a video to AirPlay to my TV. So I just went to my photos and for this example tapped on a video to play.

Once you’ve selected a video or photo, click the Share button at the bottom left of your screen.

Scroll down your sharing options until you find AirPlay and tap on it.

Available devices on your network will appear, giving you the option of selecting a television or streaming device to play your selected media.

The selected media will play on the television you selected. You can move, zoom in or out, play Live Photos with your iPhone.

How to use Screen Mirroring on iPhone

Besides using AirPlay, another option to stream media from your iPhone to your TV is to use Screen Mirroring. The biggest difference between the two is that screen mirroring will mirror your iPhone’s screen onto a television, so you can watch more than just a video or photo, for example. So you can read a website or a message on TV.

Swipe down on your iPhone screen to access Control Center and tap Screen Mirroring, it’s the button with two overlapping screens.

This will bring up available devices either nearby or on your network that you can share your screen with.

Tap on the TV where you want to mirror your iPhone’s screen. In this case, I chose my LG television. Your phone’s screen should now be visible on your TV, and you can use your phone to search for the media you want to display.

If you play your videos, you’ll notice that the video and audio will play only on the TV, so you can use your phone as a remote to control what you’re watching.

In this way you can Airplay from your iPhone to TV. Screen mirroring lets you take advantage of projecting whatever is on your iPhone onto a larger screen to potentially share with others in the room, all enabled from Control Center, where you can pause, You can play, rewind or fast forward.

What is the difference between Airplay and Screen Mirroring?

Screen Mirroring will display everything on your iPhone’s screen on the TV, so everything you do on your phone will appear on the big screen. When you use AirPlay, you’re playing media from your phone to your television without sharing your screen with the TV. Just as we listen to music on our phones through Bluetooth speakers, AirPlay connects to your Smart TV to display the media you want to display.

How do I stop mirroring my screen?

If you’ve finished mirroring your screen and want to stop, just go to your control center Swipe down again on the top right corner to select screen mirroring Again. On the next screen, tap Stop mirroring.

Why can’t I Airplay or Stick on my Roku TV?

Now, if you have a Roku and can’t find it in your list of available devices for AirPlay, you can go to Settings > Apple AirPlay & HomeKit And make sure AirPlay is on option. You can also choose your preferences for AirPlay access on this page.

Can I use AirPlay with the Fire TV Stick?

a fire tv stick Not compatible and will require a third party app, such as AirScreen or Apowermirror.

Not all televisions are compatible with AirPlay 2, so if you’re in the market for a TV and screen mirroring your iPhone is important to you, you may want to check the specifications when choosing a television to make sure it’s compatible. Works with Apple AirPlay. If your TV is not compatible but you have one stop either Apple TV 4KYou can still use AirPlay to mirror your iPhone screen.

Why won’t my iPhone connect to the TV?

as well: how to screen cast iphone to samsung tv

If the problem persists, restart your phone and television and try again. Rebooting your router may also help with this problem.

Can I use AirPlay without an Apple TV device or Apple TV+ subscription?

You don’t need an Apple TV device or subscription to use AirPlay. All you need to do is connect your iPhone and television to the same network, then follow the prompts above. AirPlay is only a feature of Apple devices.