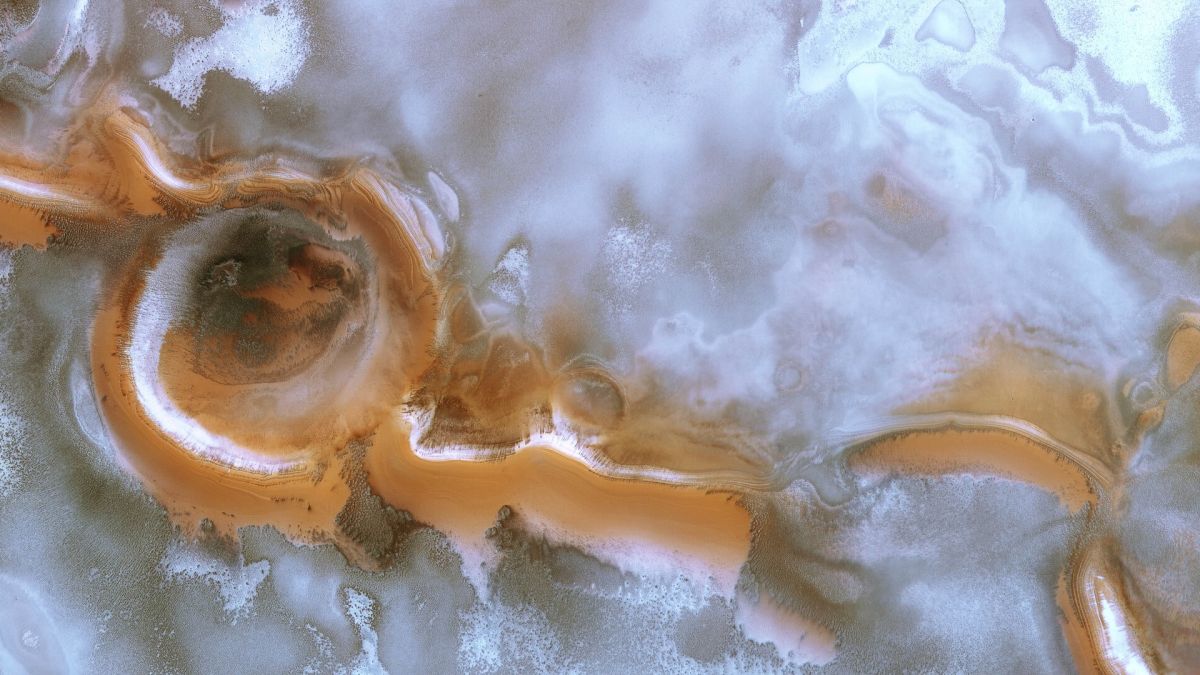 A newly released photo of Mars shows an icy scene with ribbons of red and white dancing across a frosty landscape near the planet’s south pole.

While the snowy scene may evoke the feeling of a “winter wonderland” on the Red Planet, it was actually captured by the European Space Agency’s Mars Express orbiter on May 19. This means that the colder image actually represents spring in the southern hemisphere of Mars and that the Martian ice had begun to recede.

Just six days before most of Earth has a new year on December 26, the Red Planet will begin its new year, which will last 687 Earth days. The planet has four seasons, winter, spring, summer, and fall, and like Earth, the Red Planet has cold winters and warm summers, although winters are much colder than ours, with temperatures on Mars averaging minus 76 degrees Fahrenheit. falls till (minus 60 °C).

The yuletide period is also special for Mars Express: Christmas Day 2022 marks 19 years since the spacecraft arrived on Mars.

Arguably the most prominent features in the newly released image are two massive impact craters, bounded by alternating layers of water ice and sediment called “polar layered deposits.” These deposits can also be seen in the ridge running between the two craters.

As the snow recedes, more elevated areas appear free of frost, and darker ridges across the picture pass through the surface frost in other areas. Dune fields appear as sharp ridges that run parallel to the direction of the most prevailing wind and conform to the shape of the underlying features.

Scientists think the dust filling these dunes is deep because it originated from material buried by volcanoes that erupted in Mars’ ancient history that were eventually exposed to strong Martian winds that easily carried it to the Red Planet’s surface. Took across

The other dark spots in the image represent the action of this dust and jets that erupt through the icy surface when the underlying carbon dioxide ice is converted directly into a gas, a process called sublimation. These jets cause geysers of dust to be launched into the atmosphere of Mars, then settle into dark specks on the planet’s surface.

However, these are not the only elements in the image to be affected by sublimation. The polar region is surrounded by several large, irregularly shaped features created by sublimation ice. These look like empty lakes in the Martian surface, a clear example of which appears in the upper left corner of the new image.

Monitoring these features from orbit means that scientists can observe the processes that are shaping the surface of Mars and changing the appearance of the polar regions.

But the picture of spring in Mars’ southern hemisphere isn’t just surface features. Hazy clouds are also visible on the surface of Mars. Particularly visible in the center of the image, these clouds contain water ice and their trajectories are partly influenced by the topography of the surface terrain below them.

During the Martian winter, carbon dioxide accumulates as ice at both poles of Mars, which then melts and sublimates in the spring. The release of gas back into the Martian atmosphere increases atmospheric pressure and drives strong winds.

In turn, these winds drive a tremendous exchange of material between the Martian surface and atmosphere throughout the Martian year.