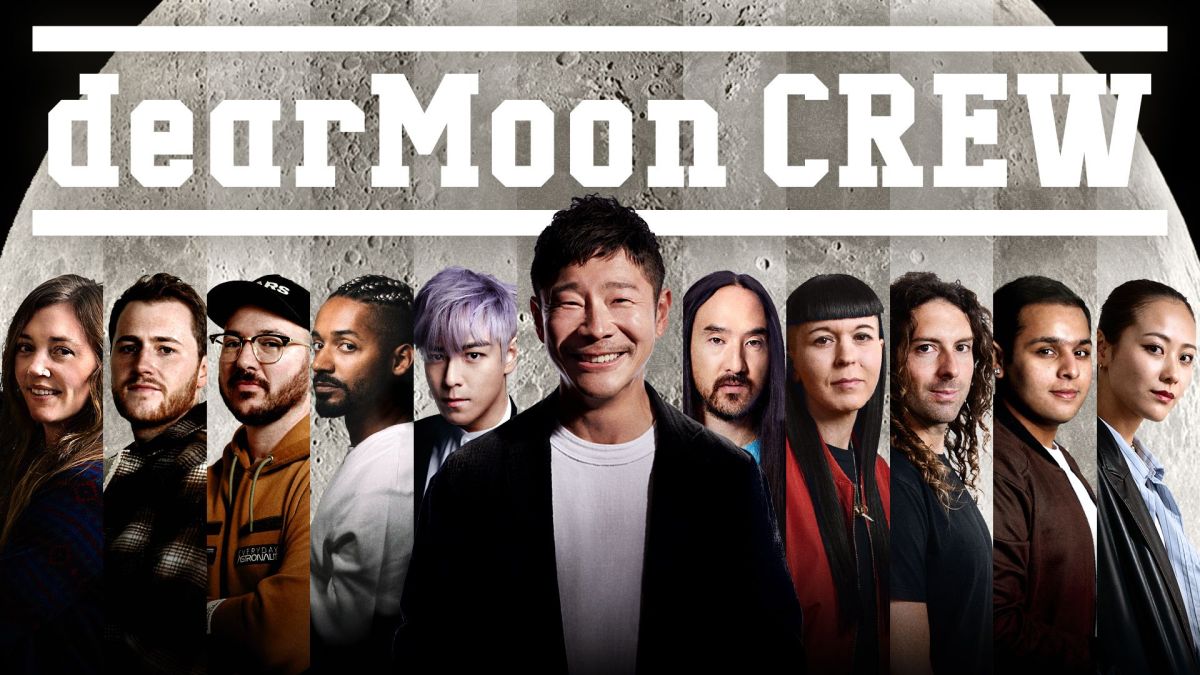 A group of nine people is planning to fly a unique mission around the Moon.

Japanese billionaire Yusaku Maezawa announced on December 8, 2022 the nine crew members, including himself, who will orbit the Moon aboard the SpaceX Starship. The date of the flight is yet to be confirmed.

Maezawa invited artists from around the world to apply for the opportunity, and said that there are no scientific experiments or other responsibilities for these individuals other than basic mission safety obligations.

“I hope everyone recognizes the responsibility that comes with leaving Earth, traveling to the Moon and back,” Maezawa said in the announcement video in Japanese.

The eight crew members and two backup members selected for the flight include singers, dancers, a YouTube personality and sports participants. Read more about them below; Their biographies are based on information from the Dearmoon website (opens in new tab),

Yusaku Maezawa, age 47 when Dearmoon Crew was announced, is a Japanese billionaire who made his fortune as an online fashion retailer. He is underwriting Dearmoon’s costs, but has not disclosed how much he is paying.

The DearMoon project was announced in 2018 in collaboration with SpaceX, following a controversial “girlfriend contest” for the now-defunct space mission. Applications for Dearmoon opened in August 2021, with no specific qualification requirements posted at that time, except for artistic aspirations.

Maezawa has already flown into space for 12 days in December 2021, paying for seats to and from the International Space Station for himself and his videographer, Yozo Hirano; Various Russian cosmonauts flew them in Soyuz spacecraft during launch and landing.

Rhiannon Adam, 37 at the time of the selection, is an Irish-born photographic artist who splits her time between London and the United States. He has been a nomad since 1992, when his parents bought a sailboat (named Jens) to travel around the world. His studies include Central Saint Martins College of Art and Design and the University of Cambridge. Awards include the Miter Award for Excellence in Photography and one of the Photographers’ Gallery’s New Talent in 2019.

Rhiannon’s work focuses on research-based, long-form, social documentary projects that utilize analog photographic processes and archive materials. Her early life experiences with a focus on remote communities have had a lasting impact on her work , the concept utopia, and the fine line between fact and fiction,” the Dearmoon website states.

Steve Aoki, 45 years old at the time of selection, is a Miami-born music producer, artist, fashion designer, entrepreneur, and philanthropist. He is the founder of the record label Dim Mack, best known for acts such as The Chainsmokers and Bloody Beetroots. His artist collaborations include BTS, Maluma, Snoop Dogg, Linkin Park and more.

Aoki’s honors include a Guinness World Record in 2012 as “the most touring musician in a single calendar year”. Their performances have been featured at Tomorrowland, Ultra Music Festival, and Coachella. He also deals in non-fungible tokens (NFTs), a controversial form of establishing art ownership through blockchain technology.

Yemi Eddy, 41 at the time of selection, was born in the former Czechoslovakia in 1981 to a Czech mother and Nigerian father.

He has designed, choreographed and directed shows and campaigns for Apple, Google, Mercedes Benz, the VMA’s, SNL and CBS and is also the founder of JAD Productions, a multi-award winning creative production company. Yemi was appointed Czech Goodwill Ambassador in 2019 and is the founder of Moonshot Platform, an American non-profit that supports young leaders.

Tim Dodd, 35 at the time of selection, is an Iowa-born content creator, photographer, videographer and musician. He started “Everyday Astronaut” as a photography project in 2013 and expanded it to YouTube in 2017, where he regularly conducts livestreams and interviews (specifically SpaceX).

“Tim’s mission is to ‘bring it down to earth for everyday people,'” says his Dearmoon biography. “He specializes in digesting complex aerospace topics and making them more understandable to the average person through in-depth research and highly visual videos.”

Brendan Hall, 28 at the time of selection, is a Connecticut-born documentary filmmaker focusing on nature. His Dearmoon biography states, “His projects have brought audiences on adventures that explore the limits of our human spirit, from a remote medical expedition through the Amazon rainforest to unearthing woolly mammoth bones in Siberia.” until.”

Hall is a graduate of New York University Tisch School of the Arts and has contributed to the National Geographic Channel, Google, Adobe, and The Nature Conservancy. His cinematography has appeared in the Netflix and PBS 2017 documentary “Bill Nye: Science Guy” following the popular 1990s children’s show. Hall’s first feature-length documentary will feature “personal stories” from various US national parks.

Karim Ilya, 32 at the time of selection, is a nomadic photographer, filmmaker and whale swimming guide. His childhood homes included the Middle East and Asia. His passion for nature has “brought him battling whales, amid erupting volcanoes, within the icy world of the Arctic, and into many fascinating places where humans and animals make their home,” states his Dearmoon biography.

Illia has documented endangered species, such as whales and birds, as an ecosystem advocate and has worked in over 45 countries. His work has appeared in National Geographic magazine and BBC Earth, among others. He also co-founded Kogia, a non-profit media library and film group focused on ocean conservation.

Top aka Choi Seung Hyun was 35 years old at the time of selection. He is a South Korean-born rapper, musician, film actor, and art collector.

He first became known in 2007 for rapping in the K-pop group BigBang. He is also known for his solo artist work and his films, including “Into the Fire” and “Tazza: The Hidden Card”.

Dev D. Joshi, 22 years old at the time of selection, is an Indian-born professional actor and social media influencer. He has been performing since the age of 3 in areas such as television, regional cinema, music albums, stage shows and advertisements. He is best known for portraying the child Indian superhero “Ball Veer”.

His awards include the “Bal Shakti Puraskar” from the President of India, the highest Indian civilian order for persons below 18 years of age. in International Affairs and Diplomacy from the United Nations Institute for Training and Research.

Kaitlyn Farrington, 32 at the time of selection, is an Idaho-born snowboard competitor. Selected as a member of the US Snowboard Team at the age of 17, she won an Olympic gold medal in the showboard halfpipe in 2014. She retired eight months later after being diagnosed with congenital cervical stenosis, a spinal condition.

“For Kaitlyn, it was a hard reality, giving up something she loved so much and redefining herself in the snowboard community,” Farrington’s biography states. “She now spends most of her time backcountry snowboarding, which she prefers to call adventure snowboarding. Caitlin is currently taking online classes to pursue a degree in business communications.”

Miyu, 25 at the time of selection, is a Japanese professional dancer, choreographer and movement practitioner. She has performed around the world, and is especially proud of the show she performed at the Cotton Club in Tokyo that sold out several times.

Her Dearmoon biography states, “Miyu has spent the past decade educating, inspiring, and connecting people around the world through dance and movement.” “Miyu proves time and again that as an artist anything is possible when kindness, grace and humility are your driving forces.”