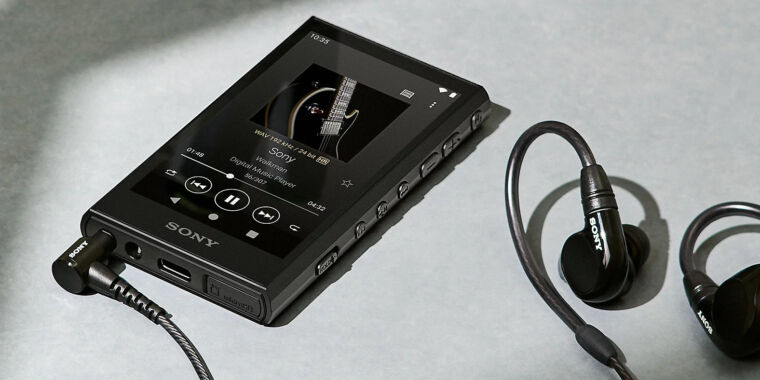 Sony has a pair of new Android Walkmans out there, the NW-A300 and the NW-ZX700. Yes that is correct, walkmans, Sony’s famous music player brand of the 1980s. Apple may have given up on the idea of ​​a smartphone-adjacent music player when it recently killed off the iPod touch line, but Sony still makes the Android-powered Walkman and has for a while. The first was in 2012 with the Android 2.3 Gingerbread-powered NWZ-Z1000, which looked like Sony stripped the modem out of an Xperia phone and marketed it as a music player. Since then, Sony has created designs with more purpose-built hardware, and today there’s a whole range of Android-powered Walkman music players out there. Sadly, these new ones are only for sale in Japan, the UK and Europe for now.

The NW-A300 is a tiny device that measures 56.6×98.5×12mm, very close to a deck of playing cards. and really, just see In these pictures. Sony may not be the consumer electronics juggernaut it once was, but it still has an incredible product design department. I have no use for a standalone music player, but both of these Walkmans are so beautiful I just want to get hold of one.

The front is dominated by a 3.6-inch, 60Hz, 1280×720 touchscreen LCD. There’s 32GB of storage, and the device supports Wi-Fi 802.11ac and Bluetooth 5. Sony wants to talk about official specs. It claims “long battery life” but won’t say how big the battery is, only promising “36 hours* 44.1KHz FLAC playback, up to 32 hours* 96KHz FLAC high-resolution audio playback”. Presumably, all this happens with the screen off.

For more specifics, we can visit The Walkman Blog, an amazing site that is very serious about these little music players. In October, the site found the documents of a 1500 mAh battery for the A300 listing. The older NW-A100 model had a system-on-a-chip NXP i.MX8M-Mini, a much slower 28 nm SoC with just four Arm Cortex-A53 CPUs and 4GB of RAM. You might say, “It’s just a music player,” but that’s not really true because it still runs full Android with the App Store and everything. Geekbench scores show that it has a new quad-core Qualcomm chip of some kind, along with 4GB of RAM, but we can’t be sure of the model number. A new chip with smaller transistors would probably account for a lot of that “better battery life” promise.

It’s a music player, so of course, there’s a headphone jack on the bottom of the unit. You’ll also find a spot for a lanyard, a speedy USB-C 3.2 Gen1 port for quick music transfers, and a microSD slot for storing all your music. The buttons on the side of the device give you every music control you could want, such as the hold switch, previous, play/pause, next, volume control, and power.