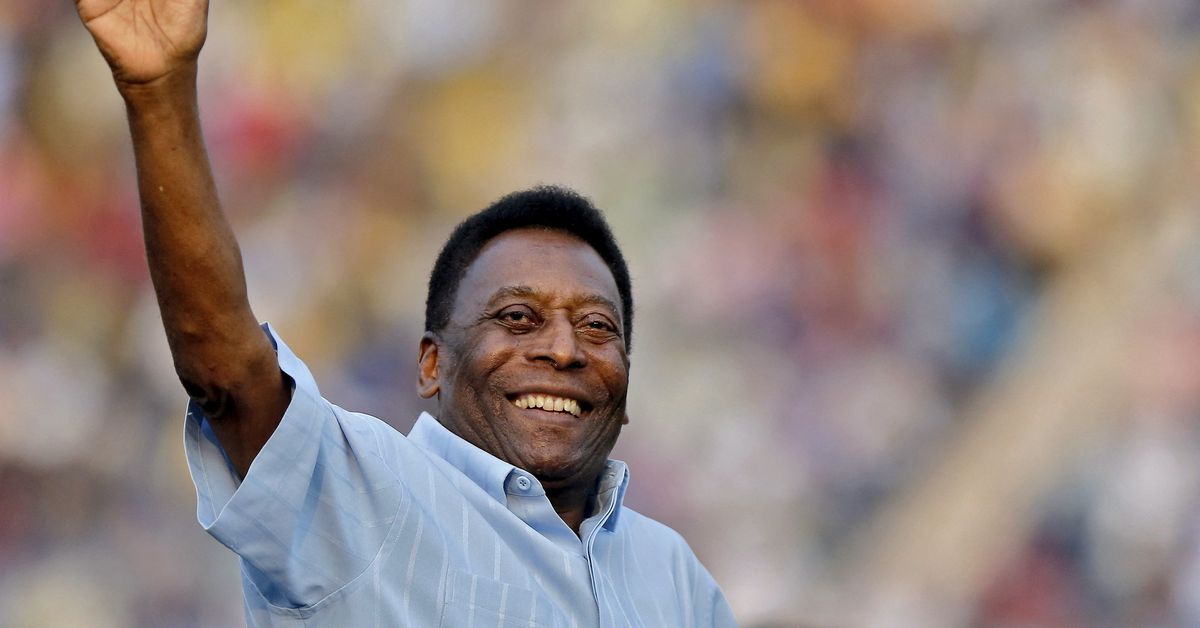 SAO PAULO, Dec 29 (Reuters) – Pele, the legendary Brazilian soccer player who rose from barefoot poverty to become one of the greatest and best-known athletes in modern history, died on Thursday at the age of 82.

São Paulo’s Albert Einstein Hospital, where Pele was being treated, said he died at 3:27 p.m. “of multiple organ failure as a result of the progression of colon cancer associated with his previous medical condition.”

The death of the only man to win the World Cup three times as a player was confirmed on his Instagram account.

“Inspiration and love marked the journey of King Pele, who passed away peacefully today,” it read, adding that he “enthralled the world with his brilliance in sport, stopped a war, Did social work and spread what he believed to be the cure to all our problems: love.”

Tributes are pouring in from across the worlds of sport, politics and popular culture for a figure who came to symbolize Brazil’s dominance in the beautiful sport.

The government of President Jair Bolsonaro, who is leaving office on Sunday, declared three days of mourning, and said in a statement that Pele was “a great citizen and patriot who raised the name of Brazil wherever he went.”

Bolsonaro’s successor, President-elect Luiz Inácio Lula da Silva, wrote on Twitter that “few Brazilians have carried the name of our country as far as he did.”

Pele was undergoing chemotherapy after having a tumor removed from his colon in September 2021.

He has also had difficulty walking without assistance since an unsuccessful hip operation in 2012. In February 2020, on the eve of the coronavirus pandemic, his son Edinho said that Pelé’s ailing physical condition had depressed him.

On Monday, a 24-hour vigil for Pele will be held at the center of the field at the stadium in his hometown of Santos, where he began playing as a teenager and quickly rose to fame.

The next day, a procession carrying his casket will pass through the streets of Santos, where his 100-year-old mother lives, and end at the Ecumenical Memorial Necropolis Cemetery, where he will be buried in a private ceremony.

US President Joe Biden said on his Twitter that Pele’s rise from humble beginnings to football legend was a story of “what is possible”.

Pelé, whose given name was Edson Arantes do Nascimento, joined Santos in 1956 and turned the small coastal club into one of the most famous names in football.

[1/4] Football legend Pele of Brazil greets the spectators before the start of the Under-17 boys’ final soccer match of the Subroto Cup tournament, at Ambedkar Stadium, in New Delhi on October 16, 2015. Reuters/Anindito Mukherjee

In addition to numerous regional and national titles, Pelé won two Copas Libertadores, the South American equivalent of the Champions League, and two Intercontinental Cups, an annual tournament held between the best teams in Europe and South America.

He won three World Cup winners’ medals, the first as a 17-year-old in Sweden in 1958, a second four years later in Chile – even though he missed most of the tournament due to injury – and a third in Mexico in 1970, when he returned to play the sport. Considered one of the greatest sides of all time.

He retired from Santos in 1974, but made a surprise comeback a year later by signing a lucrative deal to join the New York Cosmos in the then-nascent North American Soccer League.

In an illustrious career spanning 21 years, he scored between 1,281 and 1,283 goals, depending on how the matches are counted.

However, Pele transcended football like no player before or since, and became one of the first global icons of the 20th century.

With his winning smile and uncanny humility that charmed millions of fans, he was better known than many Hollywood stars, pops or presidents – if not most of them – during his six decades as sportsman and corporate pitchman. Met during a long career. ,

“I am sad, but I am also proud to be a Brazilian, to be from the country of Pelé, who was a great athlete,” said Ciro Campos, a 49-year-old biologist from Rio de Janeiro. “And off the field as well, he was a calm person, not a cocky athlete.”

Pelé attributed his unique mix of talent, creative genius and technical prowess to a youth spent playing pick-up games in small-town Brazil, often using grapeshot or wadded rags because his family could not afford real ones. ball.

His personality was often overpowered. Older adults regularly began to cry in his presence. When he was a player, souvenir-seeking fans rushed the field after games and tore off his shorts, socks, and even his underwear.

His home in Brazil was less than a mile from a beach, but he did not go there for nearly two decades, fearing the crowds.

Yet he rarely complained, even in moments of ignorance among friends. He believed his talent to be a divine gift, and spoke passionately about how football had enabled him to travel the world, cheer on cancer patients and survivors of wars and famines, and provide for a family. Granted, those who grew up often did not know the source of their next meal.

“God gave me this ability for one reason: to make people happy,” he said during a 2013 interview with Reuters. “Whatever I did, I tried not to forget it.”

Brazil’s CBF football federation said “Pele was more than the greatest player of all time… The king of football was the last exponent of a victorious Brazil.”

“The King of Football has left us but his legacy will never be forgotten,” he wrote on Twitter. “Rip King.”