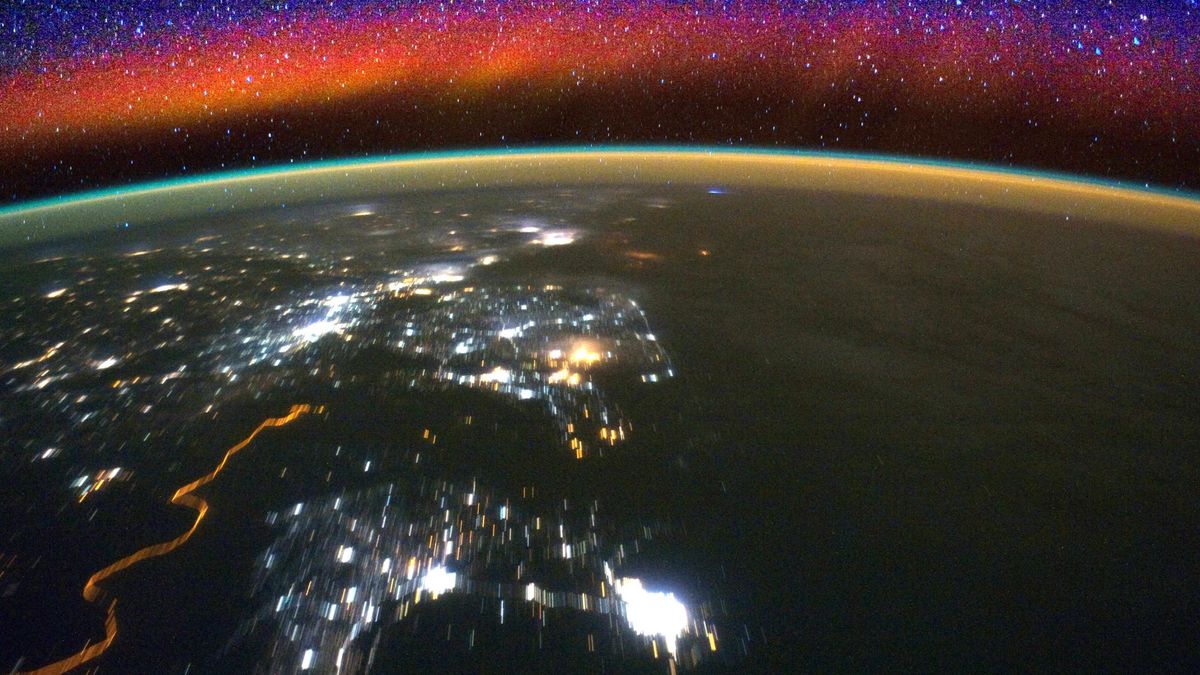 The answers are a bit complicated, but they involve the nature of light, atoms and molecules, and some of the strangest parts of Earth’s atmosphere. And big lasers too – for science!

related: The world turns upside down in tragic, glowing photo of Earth from the International Space Station

So first things first: When we look at the blue sky on a sunny day, what are we seeing? Are we looking at blue nitrogen or blue oxygen? The simple answer is no. The blue light we see instead is scattered sunlight.

Sun produces a broad spectrum of visible light (opens in new tab), which we see as white but includes all the colors of the rainbow. When sunlight passes through air, the atoms and molecules in the atmosphere scatter blue light in all directions, much more so than red light. This is called Rayleigh scattering, and it results in a white sun and blue sky on clear days.

We can see this effect dialed up at sunset, because sunlight has to pass through more air to reach us. When the sun is close to the horizon, almost all of the blue light is scattered (or absorbed by dust), so we end up with a red sun with blue surrounding it.

But if we are only seeing scattered sunlight, what is the true color of the sky? Maybe we’ll get an answer tonight.

If you look at the night sky, it is clearly black, but it is not completely black. Yes, there are stars, but the night sky itself shines. This is not light pollution, but a naturally occurring glowing environment.

On a dark moonlit night in the countryside, away from the city lights, you can see the trees and hills in the shadows against the sky.

This glow is called airglow (opens in new tab), is made up of atoms and molecules in the atmosphere. In visible light, oxygen produces green and red light, hydroxyl (OH) molecules produce red light, and sodium produces a sickle yellow light. Nitrogen, while far more abundant in the air than sodium, does not contribute much to airglow.

The different colors of airglow are the result of atoms and molecules releasing particular amounts of energy (quanta) in the form of light. For example, at high altitudes ultraviolet light can split oxygen molecules (O₂) into pairs of oxygen atoms, and when these atoms subsequently recombine into oxygen molecules they produce a distinct greenish light. (opens in new tab),

Sodium atoms make up a tiny fraction of our atmosphere, but they make up a great deal of the air’s glow, and it has a very unusual origin – shooting stars.

If you’re prepared to wait, you can watch a falling star on any clear dark night. They are juvenile small meteors, produced by the heating and vaporization of dust particles in the upper atmosphere as they travel at more than 7 miles (11 kilometers) per second.

This high layer of sodium atoms is really useful for astronomers. Our atmosphere is in constant motion, it’s turbulent, and it blurs images of planets, stars, and galaxies. Think of the flicker you see along a long road on a hot summer afternoon.

To compensate for the disturbance, astronomers take quick images of bright stars and measure how the images of the stars are distorted. A special deformable mirror can be adjusted to remove the distortion, producing images that can be sharper than those of space telescopes. (Though space telescopes still have the advantage of not seeing through the airglow.)

This technology – called “adaptive optics” – is powerful, but has one big problem. There aren’t enough naturally bright stars in the entire sky for adaptive optics to work. So astronomers create their own artificial stars in the night sky, called “laser guide stars”.

Those sodium atoms are above the turbulent atmosphere, and we can make them bright by firing a power laser tuned to the distinct yellow color of sodium. The resulting artificial star can be used for adaptive optics. The shooting star that you see in the night helps us to see the universe with sharper vision.

So the sky is not blue, at least not always. It is also the night sky that glows in the dark, colored with a mixture of green, yellow and red. Its colors are due to scattered sunlight, oxygen and sodium from the scattered stars. And with a little physics, and some big lasers, we can create artificial yellow stars to get clear images of our universe.