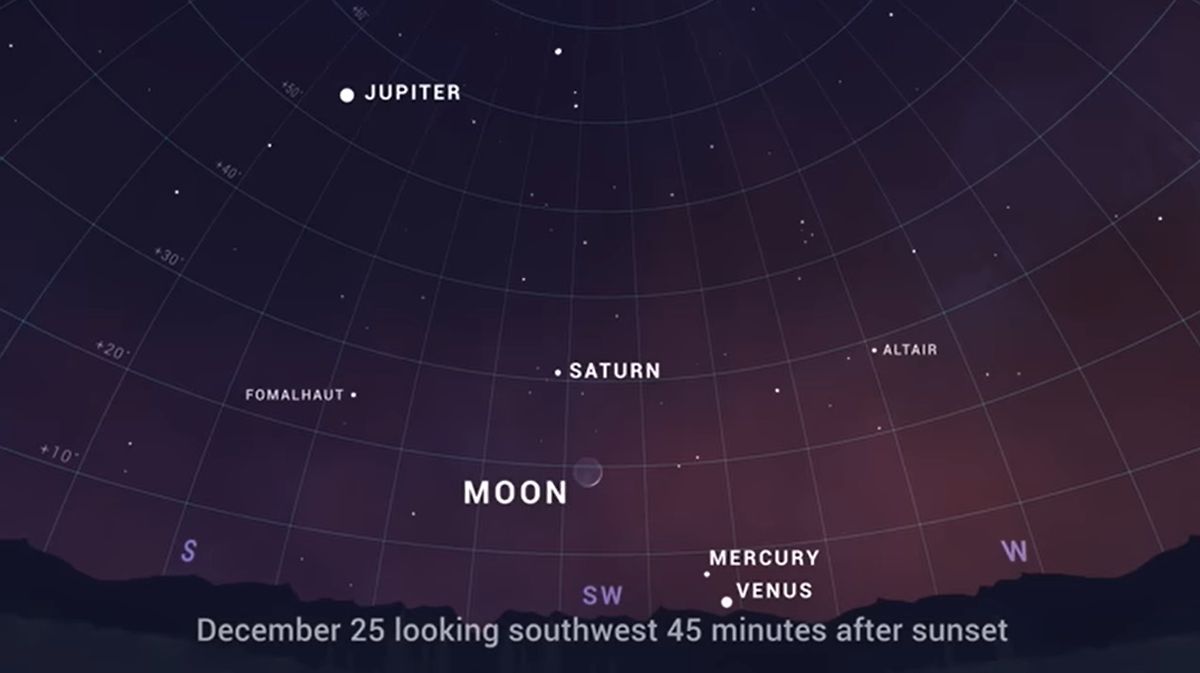 If you’re looking for a great gift that’s free this year, just look at the night sky where the Christmas moon is in a celestial recess with four bright planets this week.

This Christmas (December 25), the young crescent Moon will shine alongside Jupiter, Saturn, Mercury and Venus and will be seen transiting Saturn and Jupiter over the next few days. All five objects will appear in an oblique line from south to southwest.

If your sky is clear, all you have to do is look to the southwest to spot the Moon, Jupiter, and Saturn, which are some of the brightest objects in the night sky. If you have a clear horizon without trees or buildings, you can still see Mercury and Venus at sunset, according to the NASA guide.

“From the 25th to the 31st, look southwest after sunset to see an increasingly full Moon slipping past Saturn and then Jupiter,” NASA wrote in a guide. (opens in new tab), “Viewers with a clear view of the horizon will be able to spot Venus and Mercury a few degrees above the horizon, in the fading glow of sunset.”

If you’re hoping to observe the Moon and planets, our guides to the best binoculars and best binoculars have gear tips to help you get started. If you want to photograph the night sky, check out our guide on how to photograph the Moon, as well as our best cameras for astrophotography and best lenses for astrophotography. Read on to learn how to view the moon and planets from December 25 to December 29, below.

December 25: The Christmas Moon and 4 Planets

The Christmas night sky show begins in the southwest sky about 45 minutes after sunset as the Moon and planets align in a diagonal pattern from south to southwest.

The two-day Moon (the new moon was on December 23) will shine as a thin crescent about 20 degrees above the horizon. Your clenched fist held at arm’s length covers about 10 degrees of the night sky.

Venus and Mercury are additional treats in the Christmas night sky, but they can be hard to spot because they’re so low in the sky, both less than 10 degrees above the southwest horizon.

The NASA sky map above shows how the two planets would appear in relation to the crescent moon, with Venus (the brightest planet in the night sky) shining just below and to the right of Mercury.

Christmas may be over by Monday (26 December), but the night sky will keep on giving.

Saturn and the Moon will appear very close to each other, which astronomers call a conjunction. This is the last time this year the two planets will be seen so close.

The moon and Saturn can be found about 29 degrees above the southwest horizon on Monday night, as both objects shine brightly in the constellation of Capricornus. While they will be visible with binoculars and the unaided eye up close, they will not be close enough to be seen together in a telescope.

December 27: Moon between Jupiter and Saturn

By Tuesday night (Dec. 27), the moon will have passed Saturn but will be back in its place in diagonal alignment with the other planets.

About 45 minutes after sunset, the crescent moon will be high in the night sky and will shine between Jupiter and Saturn, with Jupiter above it. As in earlier days this week, Mercury and Venus were visible low on the horizon.

In fact, if your visibility allows you to see all the planets, you’ll see Jupiter, the Moon, Saturn, Mercury and Venus again in an oblique line across the sky running from Jupiter high in the southern sky to Venus low. Huh. less in the southwest.

Unlike at Christmas, when the Moon was below Saturn and above Mercury, on December 27 it will be above Saturn and below Jupiter.

The Moon and planet alignment continues on Wednesday (December 28), with the Moon shining slightly higher in the night sky.

About 45 minutes after sunset, the crescent Moon will shine just below Jupiter and will still be in its diagonal alignment with Saturn, Mercury and Venus. The bright stars Fomalhaut and Altair, which are visible throughout the week, can also be seen on either side of the diagonal planetary alignment.

By Thursday (Dec. 29), the moon will have passed Jupiter, taking its place at the top of the diagonal alignment that dominates the southwestern night sky this week.

The moon phase will no longer be a crescent, the moon will reach its quarter phase (or half moon) on December 29.

At the bottom of the planet table, you’ll notice the change that Mercury is no longer directly above Venus. During this week, Mercury has already gone down and on December 29th it will shine to the right of Venus, both extremely low on the southwest horizon.

And that’s a look at the Moon’s journey this week through the aligned planets of Jupiter, Saturn, Mercury, and Venus.

Planetary, the Moon will still shine brightly above the four planets as we enter a new year of skywatching over the next few days.

Editor’s note: If you take a photo of the Moon and planets, and want to share it with Space.com readers, send your photo, comments, and your name and location. spacephotos@space.com,